Hope you're havin' a good one!  I'm happy to say my meeting starts in 45 minutes and I'm all ready to go.  See?  I knew it would all get done in time ... *lol*  Having said that, last night was a lot longer than I wanted it to be!  Alicia had her first Brownies meeting.  I assumed it was an hour long and had hoped to hit Costco afterwards.  No such luck - the meeting was 1 1/2 hours long so Costco was pushed to today.  Once we got home it was the bed time run around ... then, at 9:00 pm I had to head down to the craft room to a) finish off my swaps and b) design the Make-and-Take for tonight.  Ack!  I needed a great crad FAST!  Pinterest to the rescue!  As you know from my last post, The Open Sea was a set I hadn't bought until recently ... I spotted this card on Pinterest a while back and it was one of the deciding factors in me buying the set.  I can take NO credit what-so-ever for it.  I cased it 100% from the original creator, Deb Fearns (debfearns.wordpress.com).  Check it out: 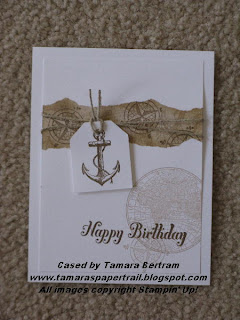 Love it!  SO simple ... yes, this one just might make it into my Stamp-a-Stack in October as the "masculine" birthday card.  I simply masked off the stamped image with some thin loose leaf paper.  I stamped various images with Crumb Cake and then the compass in Soft Suede.  Next I took my sponges and sponged Crumb Cake and Soft Sued to get that tea-stained look.  I stamped the clobe and compass at the bottom in Crumb Cake and the sentiment (Bring on the Cake) in Soft Suede.  The anchor is Suede as well and punched with the large tag punch.  I used the retired hemp twine on it only because I couldn't find my linen thread!  That was it!  We are making this card tonight ... in 36 minutes to be precise!  Wish me luck on my first "official" team meeting.

Alicia lost her tooth the day before yesterday.  Apparently the Tooth Fairy was VERY tired and overworked because she completely forgot to come to our house to take her tooth and leave the money!  Well!  That error had to be rectified.  This is what Alicia found when she woke up this morning ... enjoy it ... and have a stampy night :)

I wanted to write you a little note to apologize for not visiting you last night.  I tried my very best but a few funny things happened on the way to your pillow ...

I set off from my secret castle (which is that TINY shining star just to the right of the moon) with my list of children who had lost a tooth yesterday.  Of course you were on the list (... on page 2 since the children are listed in alphabetical order ...)  I made my first 16 stops successfully ... then I got to #17 on the list ... a little boy named Billy Bertran (he lives in Winnipeg).  That’s when everything went terribly wrong!

I found Billy’s house, but I had to spend a LONG time trying to get into it!  All the windows and doors were shut tight and they didn’t have a fireplace!  I can usually find a way in through the dryer vent but there was a big nasty SPIDER WEB blocking my way!  You can imagine how much I hate spider webs!!  I had to fly around his house 4 TIMES before I finally spotted a cat flap at the back door ... but I wasn’t strong enough to push it open!  That’s when things got REALLY crazy!  My other tooth fairy friends were all busy with their own long lists of children to visit so no one could come and help me with the door.  I had to think of something else.  I flew around the yard a few times and then spotted a dragon fly sitting on the fence.  I asked if he could help me ... but he couldn’t.  His wing got hurt earlier in the day by Billy’s cat and until it healed he could only fly in circles.  I flew around some more looking for someone else who might be able to help me.  I found someone alright ... but not someone I wanted to find!  I rounded the shed and bumped smack into Mr. Squinkles ... Billy’s CAT!!  Well!  I don’t know who was more startled him or me but let me tell you I took off just as fast as I could fly!!  For a big old fat cat that grey fur-ball could really move!!  I flew up to the roof of the house to catch my breath and think.  There was only one thing I could do.  I would have to get Mr. Squinkles to open the cat flap FOR me!  I flew down so I was just out of reach but so he could see me.  He saw me all right!  I flew over towards the house and hovered just in front of his cat flap.  JUST as he tried to pounce on me I flew straight up ... he went flying through the cat flap and went skidding across the kitchen floor.  Before the flap could close again I darted in after him and hid in the fruit bowl.  When the coast was clear I made my way up to Billy’s room.  Thinking the worst was over I tiptoed over to his pillow ... and got stuck!  Billy had been eating honey toast in bed and had dripped honey beside his pillow!  When I stepped in it I got stuck!  What a mess!  I thought I was going to have to stay there all night.  Luckily Billy had a light beside his bed.  I realized I could use the heat from the lamp to get free!  I held my little wand at just the right angle so the light from the lamp shone through the glass tip of the wand and melted the honey!  Phew!  That was a close one!  I grabbed Billy’s tooth, left him a quarter (it wasn’t a very CLEAN tooth!) and got the heck out of there before something else could happen.  My next problem ... how to get OUT of the house!  I was now REALLY behind schedule and needed to hurry.  The only thing to do to get out was the same thing I had to do to get in.  I had to get Mr. Squinkles to chase me.  I found him napping in a basket of clean laundry and had to tickle his ear to wake him up.  That did the trick!  He chased me all right!  What I DIDN’T know was that Mr. Squinkles has a brother ... Mr. Puss Puss ... and I didn’t know that Mr. Puss Puss was still outside ... on the other side of the cat flap!  Mr. Squinkles tried to pounce on me ... I flew out of the way – he went flying through the flap ... I followed before the flap could close ... but then Mr. Puss Puss pounced on me as soon as I was outside!!  He caught me by the wing!  I couldn’t wiggle free and didn’t want to hurt my wing ... so I poked him in the nose with Billy’s tooth.  He was so surprised he opened his mouth and I managed to fly away.

So!  I was now quite rattled and VERY behind schedule.  Once I caught my breath I got my list of directions to get to YOUR house but just then the wind gusted and blew it right out of my hands!  I chased it for BLOCKS but just as I was about to grab it the paper landed in a puddle of water.  I picked it up but all the writing was smudged and I couldn’t read a single name.  I had to go home to get a new list but by the time I got there your sister Rebecca was already awake and I couldn’t take the chance of being spotted ... so I had to wait until tonight to get your tooth.

I’m sorry.  I know you must have been disappointed this morning when you saw I hadn’t come to visit you.  I hope this explains why and that you will forgive me.  I’m leaving you and extra dollar to try to make up for it.  I hope you aren’t mad at me.  I think your tooth is very nice ... it’s the shiniest one I collected all week!

Be sure to keep brushing and SMILE!  Nothing is more beautiful than a smiling child!

Posted by Tamara Bertram at 5:58 PM

Tamara Bertram
Hello! I am a SAHM to two GREAT kids, a wife to a GREAT man and a Stampin’ Up! demonstrator living in Edmonton, Alberta, Canada. I LOVE all things crafty and I absolutely LOVE what I do! Please know that the content in this blog is my sole responsibility as an Independent Stampin' Up! Demonstrator and the use of and content of this blog is not endorsed by Stampin' Up! Thank you for popping in - I hope you find a project you like and leave inspired! 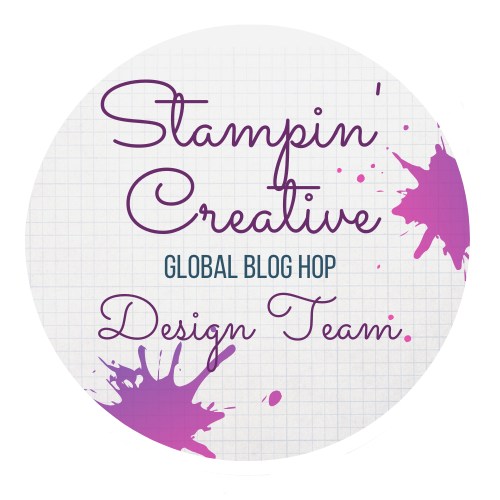 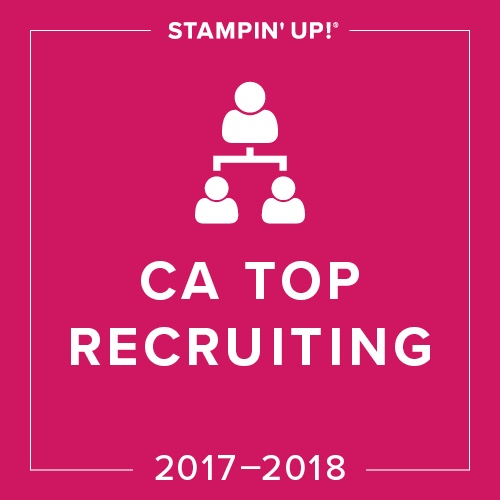